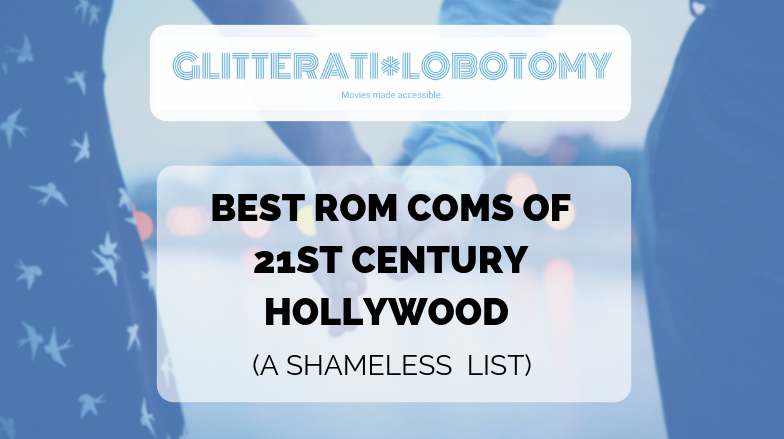 The Lighter Side of Love

Ok, let’s all take a moment to be honest with each other about rom coms. They don’t offer an accurate portrayal of love or relationships. They also generally fail to say anything profound about the nature of human relationships.

But you know what? That’s ok. Every movie doesn’t have to be an ultra-serious arthouse movie about life itself and our place and purpose in the universe.

I grew up on rom coms, with my parents doing their best to fast-forward through especially suggestive or explicit scenes.

Here are some of the best rom coms of 21st century Hollywood. So grab your significant other and cuddle up on the couch, STAT. Or don’t. These flicks work just as well when you’re watching alone. Trust me, watching movies alone is my area of expertise.

I actually didn’t get to see this movie when it first came out. I was still pretty young at the time and from a distance, the movie looked like the kind of low-brow comedy that my family tended to avoid.

So long story short, I only saw this movie for the first time about 5 years ago. And I just wasn’t expecting to be so thoroughly delighted.

Yes, it’s stupid. And yes, it represents a very specific moment in American comedy, one that hasn’t aged incredibly well.

Jason Segel needs to forget about having dated Kristen Bell. Pretty tall order, if you ask me.

But don’t worry, he’s headed to Hawaii, and Mila Kunis is there, eager to help.

This is also one of the first American movies that featured Russell Brand, who would go on to have a moderately successful movie career in the U.S. (Personally, I think his greatest performance was as a humorously disturbed individual in Adam Sandler’s awful Bedtime Stories.)

Overall, it’s a movie to watch and rewatch, again and again, especially when you haven’t left the house for 3 days. (Don’t worry, I’ll leave soon. The groceries are running out.)

There’s a subtle lesson in there at the end about taking care of yourself first, before reaching out and trying to impose yourself on other people, especially potential romantic partners.

This movie has come to take on a bit of controversy in the years since its release.

I think back in 2009 we watched (500) Days in Summer and related to the character of Tom, ably played by Joseph Gordon-Levitt. After all, he’s the protagonist and the movie is told from his perspective.

But that’s the thing: the movie points out several times that Tom’s experience of the real world is incredibly biased. He’s not seeing things objectively, and his anxiety and paranoia ultimately make him torpedo his own relationship with the eponymous Summer.

I don’t think that the movie is inherently supporting the idea of unfairly judging a significant other.

I think it’s a movie about a headspace that we’ve all experienced before. Emotions get in the way of logical thought and negatively influence our actions.

We let past disappointments get in the way of any real chance at happiness.

More than anything else, I love the stylish filmmaking here, and how it manages to give audiences a pretty fresh take on the typical rom com formula.

What’s more, the soundtrack holds up, probably better than the movie has.

Judd Apatow might be a comedic genius of some kind.

That doesn’t exactly mean that I love his movies to death, but he definitely has a specific artistic vision and he’s pulled it off many times over, with the help of some very talented actors.

The U.S. version of The Office premiered in March of 2005. In August of that year, Steve Carell starred in The 40-Year-Old Virgin.

Both of these properties would go on to become staples of mid-90s American entertainment.

If you’re not already familiar with the premise of the movie from the title alone, it’s about a 40-year-old guy who works at an electronics store, and he’s never had sex.

This is another one that’s not all that intelligent in its execution, but it gets laughs. Period.

Catherine Keener co-stars as Carell’s love interest, and can we just do a separate article on how great Catherine Keener is? I’ll have to look into that. She’s just fantastic and she knows how the hell to pick a project.

This is one of those movies where you see it differently depending on where you are in life.

But I understood the idea of worrying about how others see your family.

Nowadays, I see it as an interesting take on culture clash in America, and how it can get in the way of relationships.

It’s a reality you run into more and more as you live your life. There are lots of invisible lines separating each of us, and finding a way to cross those boundaries with love and good intentions is worth the effort.

It’s a bit low-budget, but the story is simple enough and the performances make every single character believable.

Woody Allen is probably not such a great person, at least based on the information at hand and what he says about himself in all of his movies.

But. Lots of his movies are very good. Midnight in Paris is very good. It’s also one of the only rom coms I can think of that makes effective use of time travel.

A writer fella finds himself occasionally zapped into 1920s Paris, a time when many writers, painters, and photographers of note convened and created some groundbreaking work.

He has to use this window to the past as a way to analyze his current relationship, and whether he’s heading toward the life he really wants.

A few of the performances are flat-lines, but it’s also one of the brightest and most enjoyable rom coms of Allen’s career.

Paul Thomas Anderson likes to hop from genre to genre, and Punch Drunk Love is likely the only time that he’ll ever work within the realm of rom coms.

Adam Sandler plays a guy who sells high-quality toilet plungers to hotels. One of his many sisters introduces him to a lovely lady who likes him a whole lot, despite his violent outbursts and strange personality quirks.

To sum it up: this is a rom com movie for the arthouse crowd. It’s smart, well-shot, and incredibly strange.

What’s more, the score composer, Jon Brion (Eternal Sunshine of the Spotless Mind, Paranorman) was actually on set during shooting and used melodies and sounds from the shoot itself to inform his compositions.

And don’t forget that very strange remix of a song from the Robin Williams Popeye movie.